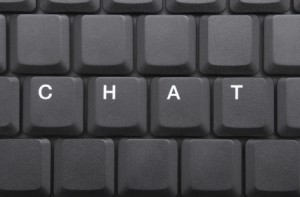 Since I’m a guest on Melinda Emerson’s (@SmallbizLady’s) #SmallBizChat show tonight, I thought I’d do a quick post with ideas on how you can use a Twitter chat to make deeper online business connections. If you are not active on Twitter yet, feel free to skip or skim this post. I helped Melinda start this chat several years ago and co-hosted her chat with her for over 80 shows, so we know a thing or two about chats…and how they can be a small business secret weapon.

Twitter chats are unique, in that, instead of tweeting into the equivalent of an empty room, which you hope that a few of you followers are passing by at the time, instead someone like Melinda, has picked a day of the week and  a time and a topic, and a hashtag (in this case #SmallBizChat) and has publicized that event on Twitter and on her blog. This means that at that day and time, people interested in that topic will show up. No more tweeting to an “empty room.”

How Can I Make Twitter Chat’s Work for Me?

But like some offline networking events, Twitter chats can feel crowded. Here are some tips to help cut through the chatter. Try using a third-party tool to help you  keep up try www.tweetchat.com or www.tweetgrid.com in party mode (put the #hashtag in the top, host’s twitter name and the guest’s twitter name in the middle, and your name in the bottom – then a three column grid comes up – all tweets in left column, the host and guest’s tweets in the middle and yours in the right column). Melinda has prepared a tweetgrid for tonight already: http://bit.ly/SBChat192. Book mark it and come back 8 pm ET Weds. 3/27/13.

Be sure you know the host (@SmallBizLady) and guest’s (@CathywebSavvyPR) Twitter names, follow both of them. Keep an eye out for the questions and answers they will be tweeting.